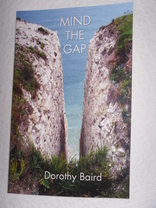 Her work has been widely published in magazines and anthologies, including 'New Writing Scotland', 'Acumen',' North', and 'Obsessed with Pipework' and highly commended in poetry competitions.

Mind the Gap  can be purchased from Indigo Dreams Publishing (IDP) using the link: www.indigodreams.co.uk/dorothy-baird/4590921306

She is an accomplished and experienced reader of her own work. Recently she was a finalist in the Shore Poets Quiet Slam in Edinburgh.

She is very pleased to offer readings to groups.  Please contact her for more details.

'There are poems of loss here, but more of gain, of the transformations of children into adults and the necessary adjustments parents must make. There are also poems of place, of the East and West coasts of Scotland, and of the natural world and its inhabitants. Dorothy shows a confidence in her use of language, and in formatting poems to give emphasis to pauses. It reads extremely well.'
Colin Will

'Dorothy's second collection is a delight. In tune with nature, the poems explore what it means to be human. I was particularly drawn to the character of Poetwoman.'
Susan Jane Sims

'Dorothy Baird catches moments as a photographer might, though always in 3D. There's depth as well as richness in and between the lines. This is an immensely readable collection.'
Eleanor Livingstone

‘These pieces are the outpouring of a remarkable talent. They are an eloquent meditation on our lives, filled with intensely personal experiences which Dorothy Baird has triumphantly universalised. In an increasingly ugly and unpredictable world, these poems are a reminder and an example of just how beautiful life can be.'  Christopher Rush

Darkness. A drumming of women
slapping and whacking
dirt from clothes. Knee deep
in the Ganges, suds floating
on the black water like flowers.
There is no sign. No movement
of the earth that asks for change

but change is written on the river
and somehow the almost light
floats in: that grey-blue time we give
no name as if we favour the gloaming dusk,
the twilight, the crepuscule,
when all promises are rescinded
and we are comfortable in regret

and not this eastern moment
when the sun begins to rise
over the smudged line above the scrub
in its veils of gauze
and we fall away
like smoke, like water, like thought
into this slow power of movement.

My daughter poses in front of the mirror
with nothing on. She leans, arms stretched
above her head trying on faces, and I wake
from months of blindness: this preening girl
has wintered in the darkness of her clothes
the curve of hips, the swell of breasts.
She's pouting now, lips in league
with her sultry gaze. She sways, provocative
as a lap dancer, her feet just missing
the plastic figures she was playing with
half an hour before.

Her home was up a clutter of stairs,
a twist of darkness, where the tap tap
of her stick tipped your spine
Black skirts. Black shawl.
Fingers like heather roots.

The wind lists now at the glass,
unpicks the paint, scatters cherry blossom
from the trees folk used to say
should have been rowans,
and there's nothing there to show
the shiver of air
that hung around her door
- those clenched-heart dares
to ring her bell and run away.

The Shape of a Mother

The shape of a mother
shifts in all the years she learns in,
testing the sharpness of her heart
against tomorrow when her children leave.

She hides the truth in her bones.

On wintry days they ache
when she sees in her mind's eye
her home empty as the blue tit's nest
she found, its neat circle of hair,

twigs and a pink scrap of paper
from who knows where, cold
now. But what can she do

but go on doing the small things
she's so good at, lining her nest
with pieces of days, moving her joints,
remembering summer?