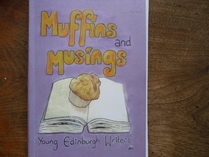 Book by YEW launched in 2011
Dorothy founded the Young Edinburgh Writers YEW in 2009, to give young people in the city the opportunity to come together and meet other teenagers who shared their interest in creative writing. It takes place in the Central Library, George IV Bridge, Edinburgh. She ran the twice monthly group for five years before handing it on to another tutor who led the group for four years.

The group unfortunately is no longer running.

NEW PROJECT 2012   'A Room With Our View'
YEW was awarded money from the Young Scot Creative Enterprise Fund for an ambitious project that took place in the Central Library, George IV Bridge, Edinburgh from March 19th - April 27th 2012. Titled 'A Room with Our View', it was a poetry installation - a little along the lines of Tracy Emins - though less rumpled, with more furniture - and with the wonderful addition of the group's original poetry carefully printed on the objects themselves. There were poems about sleep printed on the duvet, poems about reflections/mirrors on the mirrors, words about light on the light, poetry abaout curtains on the curtains, even a poem about a mobile phone on a phone - with the make-shift room being an unusual and unique vehicle for showcasing their creative work. There are some great photos on the library's website, Tales of One City, see:  www.talesofonecity.wordpress.com/2012/03/20/a-room-with-our-view-in-pictures/

Some of the YEW group at their poetry installation, A Room With Our View in Edinburgh's Central Library

YEW was fortunate enough to be awarded money from the Young Scot Arts Action Fund to produce 'Muffins and Musings', a book of the group's writings. The group was involved in all stages of the book, from writing the content, choosing the title, designing the cover, ordering the work and planning and rehearsing for the launch. On Thursday 3rd March 2011, 'Muffins and Musings' was launched at the Scottish Poetry Library, Edinburgh. It was an excellent evening with lots of fine writing, clear and polished performances - and lots of homemade muffins. Friends, family, writers, representatives from Creative Scotland, the Scottish Book Trust, and the Young Scot came to celebrate the achievements of Edinburgh's young writers.